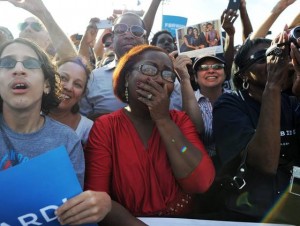 (Reuters) – Traders and investors seem to agree on one thing about Tuesday’s U.S. presidential election: The markets want a clear winner by Wednesday morning.

Some market analysts forecast doomsday scenarios if a particular candidate wins – predictions that usually reflect their political leanings more than anything else.

But markets hate uncertainty, and having a drawn-out U.S. presidential election would be the ultimate uncertainty. Few investors on either side want a repeat of the protracted fight that followed the 2000 race between Al Gore and George W. Bush.

“If we wake up Wednesday morning and we don’t know the results, that also pushes off the dealing with the fiscal cliff, which is the next most important thing in our agenda,” said Art Hogan, managing director of Lazard Capital Markets in New York.

Markets are terrified of this next step for the United States – figuring out how to stave off the fiscal cliff, or $600 billion in tax increases and spending cuts that could kick in next year and send the U.S. economy reeling.

The stock market “has been directionless over the last few weeks because of uncertainty about what fiscal and tax policy looks like next year,” said Perry Piazza, director of investment strategy at Contango Capital Advisors in San Francisco. “You could argue that just having the uncertainty behind us could lead to a bit of a relief rally.”

Whoever wins, the president will also have some sway over monetary policy, even though the Federal Reserve is theoretically independent from the government. A Romney victory would throw the status of Federal Reserve Chairman Ben Bernanke into doubt.

Romney has said he would replace Bernanke, whose dovish monetary policy has been a pillar of the gains in both U.S. bond and stock prices in the recent years.

As U.S. voters started casting their ballots, the U.S. stock market opened higher, with the Dow Jones industrial average, Standard & Poor’s 500 Index and Nasdaq Composite Index rising 0.54 percent, 0.34 percent and 0.02 percent, respectively. Not much volatility is likely as investors keep their eyes on election news in battleground states such as Ohio.

Unlike in 2000, this time Ohio instead of Florida is expected to be the pivotal proving ground for taking the White House. At issue is whether the Obama administration’s bailout of the auto industry will carry the day or whether Romney will maximize turnout in the Ohio suburbs.

The equity options market is pricing in a 20- to 30-point in either direction for the S&P 500 on Wednesday, according to Marko Kolanovic, global head of derivative and quantitative strategies at JPMorgan.

Many believe the larger move could come as a result of a Romney win. “I think the market is expecting an Obama victory, so I think the most important thing is that you don’t get much of a response if you have an Obama victory,” Jonathan Golub, chief U.S. equity strategist at UBS Securities, told Reuters.

The benchmark S&P 500 has rallied 67 percent since Obama took office – one of the most impressive runs ever for stocks under a single president.

And despite a downgrade of the U.S. credit rating from the Standard and Poor’s agency in August 2011, yields on the benchmark 10-year Treasury note hit historic lows last July. Cumulative returns for all maturities on all U.S. Treasuries are at 14 percent since the president’s inauguration, according to data from Barclays. (Additional reporting by Atossa Abrahamian and Jennifer Ablan in New York, Doris Frankel in Chicago and Claire Sibonney in Toronto; Editing by Lisa Von Ahn)